Hokay, another long-ass chapter I'm pretty sure will be broken up in future edits.  I'm gonna give y'all part one today, and the rest when I finish it.

So, we all know I have the Farscape complete series set by now.

I've also got a number of the old ADV releases I got as hand me downs, and if they could find a good home out there, I'd rather pass 'em out than toss them to the cold heartless video store.

If anyone wants any of these, let me know, and we'll work something out.

This one is for the Lost fans on the friendslist.

I got my Lost season 5 limited edition Dharma Initiative Orientation Kit DVD set a day before they're set to be released tomorrow, so know what I did?

I snapped the hell out of it with the camera, to give y'all a sneak peak.  Because I'm sneaky like that. 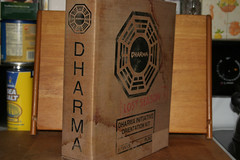 Check out the two dozen photos!

This is a REALLY well made, very meta set, and it's probably my favourite thing in the world right now.

I've got some complaints though, and I'll be filling in a lot of comments on the photos later, I am running really late, and need to run away.  So check back later, too!