Ok, I usually have a plate of leftovers made up to eat at a later date around oh...now, since I'm nocturnal.

I just looked at the mashed potatoes on the plate I yoinked from the microwave, and let me tell you...Richard Dreyfuss would loves this mound of crushed spuds.

No, Unfinished Business is not the best, or even one of the best episodes of BSG, ever.

The boxing goes on for ever, and feels like a waste of time. The flashbacks are pretty decent, until the shouting declarations of love in an open field, and characters doing arbitrary things for arbitrary reasons.

I place this more as one of my least favourite episodes.

And going from a 45 minute cut and making it more expanded to ONE HOUR AND TEN MINUTES does not make it better. Good gods.

J
In fairness, I'm not a sports fan, so I may be missing something.

The man's rantings in the old X-Men cartoon stuck in my head, what can I say?

A pretty awesome looking bust of Apocalypse, clocking in at almost a foot talle.

And that's 'pretty awesome' as far as something looking like Apairoflipse can look, but I think this looks great, for what it is. 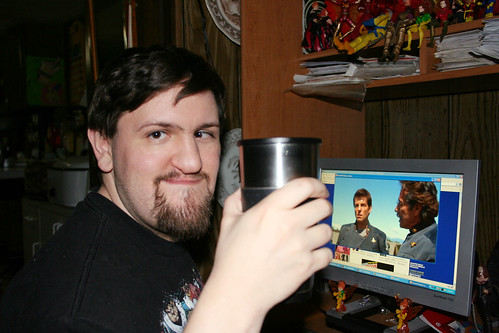 Taken this morning while watching BSG, and having my first coffee in almost ten days.

I feel pretty good, and the coffee tasted damned good after all that time.

I've aquired a number of costuming/cosplaying friends over the last few years, so this might be of some...amusement? to them.

This is one of the weirdest things I've seen in awhile.

I've been conventioning for awhile now, and have acrued many photos, and posted them on Flickr (Best 25 bucks I spend a year), and gotten many views and comments.

But this takes the cake.

I was checking for any new activity recently, and discovered some new comments on this photo.

Some guy saw a pic I took of a girl dressed as Storm at Dragon*Con 2006, and left a comment demanding she send him her costume. Which is weird to start with, because I have no contact with this girl, but the tone of the message also seems to feel like he might think I *am* this Storm, which is really weird, as anyone who knows me can attest to, as it's far from me. ;)

He also leaves his email address for contact. But wait, there's more! He leaves his REAL ADDRESS TOO.

Oh wait, the weirdness continues, because over here he tries to enlist help from Tony Todd. o.O Again with his address!

The evil part of my brain wants to go visit his apartment and tell him to stop posting!

The *really* evil part of my brain wants to set up a fake GMail account and see how long I can mess with his head as "Storm". >.>

If this is the weirdness I get, I can only imagine what y'all with the real costumes have to deal with. =)

haleyravenlock has sleuthed out a few more comments he's made on Flickr, but nothing quite as weird, yet, as those he left for me.