Something about Heroes has been bugging me ever so slightly, and that was Noah's claim that every one of Isaac's paintings have come through, except for the series of eight he's currently looking for.

That's not true, and there's several examples we as viewers know about.

First the big one, exploding New York. And from that, you can go to all the post-explosion paintings as well.

Then there's the artwork of Uluru and whomever from the 9th Wonders comic.

While it may have come true, there's the painting of Hiro and the dinosaur, but I don't see how Bennet would know that one had happened, but since it DID come true, I'll let it slide and assume Hiro or Ando told Kaito who told...someone, and it eventually got back to Bennet. Still, feels weird.

And Then there's the sketchbook which surely has other pieces of art that we are likely to have not seen, but since Bennet doesn't know about those, he wouldn't know either way.

Sure, you could handwave he was just overexagerating to get the point across to his wife, but it still bugs me a little, and I felt like rambling about it. It's easy enough to No-Prize an explanation or 12, but still, just a nagging thought poking my brain.

I got a candle today that's a skull, and as it melts, the eyes and mouth are supposed to appear to be dripping blood.

To paraphrase Jigsaw, oh yes, there will be photos. =D 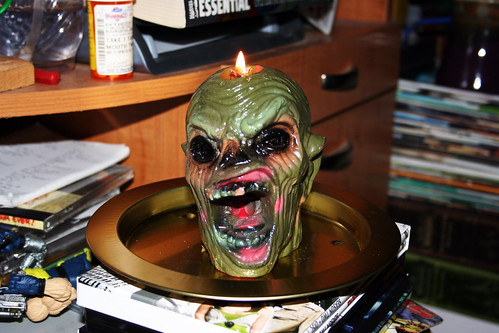 Just started burning with this pic. More to come, once the fun begins, and probably all at once, to spare people. ;)