In the late '90s, some of the cast of Babylon 5 formed a singing group and put out a lone CD, as the Be Five. It's pretty hard to find, and really only of interest to the Babylon 5 fans. 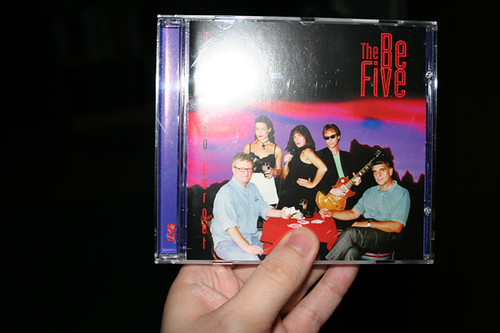 Which is why I finally found a copy for myself.

Nowhere near as cool as the army of Jeans, but I love that there's a Manhunter Cyborg figure on the way.

And a GL Batman. I hope they variant that with his Sinestro Corps costume.

Love Cyborg having a bunch of rings, too.

I was wondering when they were gonna do it.

That religious group of asshats that likes to blame everything on gays? And protest gays at the funerals of people who die in tragedies?

Well, their next stop will be at the funerals for those who died in the 35W bridge collapse.

And no, I won't be linking to a story about it, and I really can't be bothered to remember their name. No traffic from me to them shall be generated.

Issue #100 of Exiles starts a new arc for that series, it was announced. A crossover with New Excalibur ends Claremont’s run on the latter book. Fans were told to look for interesting new developments with Blink.

Paul Cornell (Wisdom) is taking over New Excalibur. The British writer who recently contributed an episode of Dr. Who was apparently accidentally drunk during a recent meeting with Marvel in England. Joe felt bad for telling the story, but went on with it anyway. Cornell said this is the book he’s always wanted to write for Marvel. He does plan to change the line-up, which may happen during Messiah Complex.
Collapse