So, I think there's a few fans of this little show... Not sure though, not heard a whole lot about it...

The CW doesn’t announce its first autumn schedule until Thursday, but TV Guide’s Michael Ausiello already got an e-mail from “Veronica Mars” creator Rob Thomas confirming that “Mars” will back next season. The series gets a 22-episode order reducible to 13 episodes if the ratings aren’t there.

Also says they picked up One Tree Hill for another year, but that sounds less official to me.

Good news, after a fashion.

"We really wanted to just say to the audience, 'Listen, it's going to be on for this block here and then we'll bring it back and it will run straight through,'" explains ABC Entertainment President Stephen McPherson. "So yes, the plan is that Lost will come on in the fall in the first or second week of the season, run for seven episodes and then Day Break will launch into that period and Lost will come back in January or early February and run straight through for the remainder for the season."

Although with a show like this, reruns can be handy. But I've really enjoyed my Jack Bauer Power Hour going unbroken straight through, and limiting the interruptions on Lost will be most welcome.

You know, maybe mix up the way things are done a bit, and basically do two half seasons. 13 episodes in the fall, and 13 in the winter. I'd love to see more shows go that route, and have other shows air during the 'rerun' periods.

Supernatural gets a second season!

And there was much rejoicing!

Put down the pitchforks and torches, everyone, we don't need them! 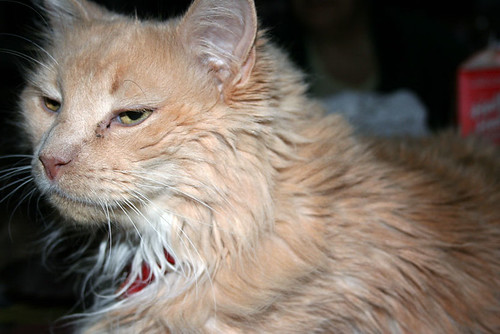 After fifteen years, and with a past few months of living by the water bowl, being unable to jump on anything more than a foot or two high, and discovering a lump on his jaw the other day, parents brought Morris to the vet to see what-all was wrong with him in his dotage, and there was quite a bit, so we had him put down. Diabetes, liver failure, and more, so we decided to put his suffering at an end.

On the upside, at least he won't be sneezing in my face anymore. ;)