Many of you know the story of the car crash with the moose. I at long last have my hands on the photo of the car after the crash. 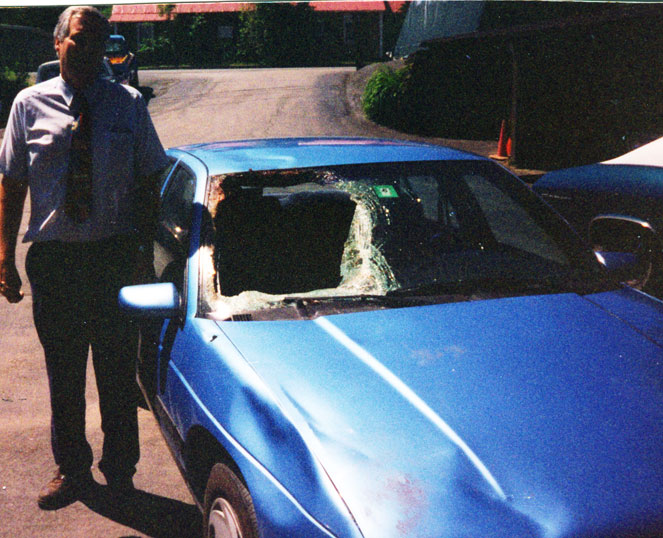 I believe that is John's father in the picture, but I'm not absolutely certain.

I was sitting where the giant, gaping hole is.

When someone tells you they do not like anime, do not question them.

Do not make reccomendations.

Because those of us who do not like anime are sick and tired of answering this question, and after ten years of endless reccomendations, we *just* may have formed out opinions about it by now. You are not the first people to suggest Mooshoo Wigwam Anger Bunnies to us.

The one question I am FRIGGING SICK of hearing is "Why do you hate anime?"

BECAUSE IT SUCKS! Gah.

You do not have the mystic magical lone film that is the one piece of anime that Does Not Suck and will instantly change my opinion. All the constant pestering does is MAKE ME HATE IT MORE. Ten years since I first discovered anime. There has been no mystical advancement that makes this new stuff better.

I have an extra copy of Farscape season 4: Collection 1 that I have a duplicate of.

The episodes on this two disc set are Crichton Kicks, What Was Lost pts 1 & 2, Lava's a Many Splendored Thing, and Promises. It is unopened, and I already have a copy. If anyone wants it, let me know, and we'll make arrangements. First come, first serve.

A story in Wednesday morning’s Daily Variety suggests that 20th Century Fox Television, which produced “Futurama,” may now be talking about bringing back “Futurama” as a series instead of – as previously rumored - some kind of movie or TV-movie or DVD-movie.

Debunking the myths of the events of September 11th, 2001. Brought to you by Popular Mechanics.